The use of greenhouses in agriculture is well known, in which crops are grown in at least partially controlled environments. In the greenhouse, equipment is installed to control the temperature and humidity, which is expensive for small and marginal farmers in our rural environment. For the eastern region to make it more powerful and valuable, ICAR Making of the poly house is done at Research Campus, Patna.

A poly house is a structure made of transparent polythene and iron rod, inside which the temperature is 5-7 cents greater than the outside environment. It can be used to grow summer vegetable nurseries so that the availability of vegetables from the market is 20-35 days earlier than that of seasonal vegetables. It costs about Rs.3500/- to build a poly house (5m X 2.5m X 1.6m). The cost per poly house is Rs.3500/-.

To build Dome Type Poly House, first of all, M.S. Let’s prepare the fixture from the angle section. For which 35 x 35 x 5 mm. An angle section of 15.4 feet is given by folding it into a crescent shape to form a fixture. Keep in mind that one edge should be up while turning it, and the other side should be up.

Then cut the iron leaf into the L shape at the corner and fit it with the nut volt. M / s. 15 feet long six pieces of pipe are cut with a hand hacksaw and mounted on their fixtures, first by pressing them slowly with hand and then turning them into crescent shape by beating them with a wooden hammer, if any deficiency remains. By cutting the wood and placing it on it, make the pipe in a proper crescent shape with the help of a wooden hammer.

Similarly, all six pipes are bent. After bending the pipe, 2 x 3/4 size perforated iron strips at both ends are connected to gas welding, which is done by nut volt in base sequence.

Length of the Poly house

M / s. 25 pieces of one-meter long pipe are cut to which belt at one end and nut at other end are joined by gas welding, which is then fitted between crescent-shaped lines as shown in the picture. This strengthens the polyhouse and gives support to the polythene. One hundred microns or more thick 16.4 x 16.4 ft transparent polythene is used so that light can easily penetrate it.

If polythene is available in one piece, then with the help of a spirit lamp, it is made in the middle by adding it to the required size. For applying polythene front and back, cut into a crescent shape, for which 3 m. x 2 m Two pieces are cut, then keeping the crescent-shaped frame, take 1 extra round and cut it, which is necessary for pressing at the time of joining.

Keep in mind that polythene is taken 3 inches or more at the bottom, which is necessary to wrap it on the pipe and then do it again with a machine screw. After the structure of the polyhouse is ready, it is necessary to do iron oxide (metal primer) on it, and it does not rust. After the metal primer, the enamel paint of the required color increases the life of the polyhouse and looks beautiful. 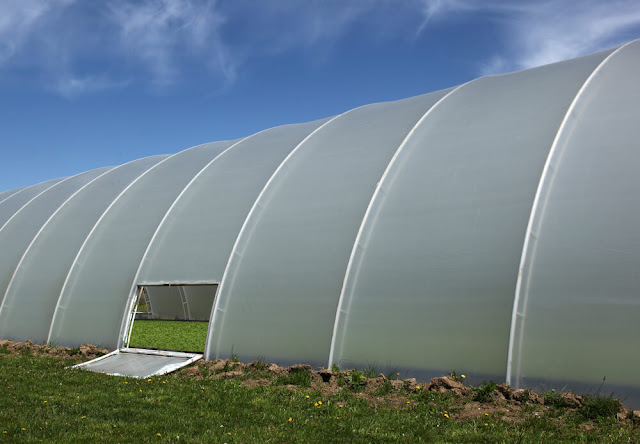 By mounting the prepared polythene on the frame, 6 M.N.M.N. on the frame from all four sides with a machine screw. The polythene is tightened by spraying (holes as per requirement). In the end, the polythene that came over the door is cut with scissors, and the door’s exit is made. Then take 3 extra-long polythene from the edge of the door and make the cover of the door.

3 At a distance of 6 from the edge of the door cover made of polythene, Velcro (charchari) 3 long main parts are affixed with fevicol (SR-998). Similarly, 3 long pieces of the female part of Velcro (charchari) are pasted on the polythene mounted on the edge of the door made of pipe; keep in mind that before pasting the Velcro, rub the smooth surface of the polythene with sandpaper or rough object, then the Velcro is well fevicol With the help of polythene sticks.

Pusa Poly House M.SM.S. The pipe and nut are prepared with the help of bolts, and the polythene is tightened with the mainframe of the machine screw. This type of poly house can be fitted anywhere and kept open when it is not needed. If its nut volts are lubricated with oil, then the poly house can be used for five years in good maintenance.